Premier League just left seven games again. Manchester United still stay on third standing premier league 2014/2015 season but The Reds Devils still not save cause there are many team hunted their. Manchester City fourth, Liverpool fifth, Tottenham Hotspur sixth, and Southampton seventh. Still alot possibilities for their to standing on the Big Fours Premier League in this season.

Manchester United and Manchester City they are will for each kill, cause they are will play the derby manchester on Sunday. Margin point which is only one among both of them cause the game is very meaningful to for two teams. Not only that the game was an opportunity of revenge for United your first meet in this season lost 0-1 at home City. United can confident cause they are not lose at last fives game in the premier league while City had down perform at last five game. 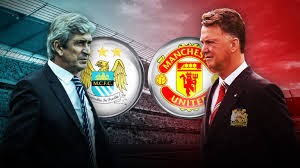 This is the record for two teams


That little fact between the two teams. And prediction of the match I will sponsor United because they are in a nice graph to be able to beat City. The scorer will be United 3 vs 1 City.

Thanks for visit and read my fact for United and City ( Derby Manchester ).